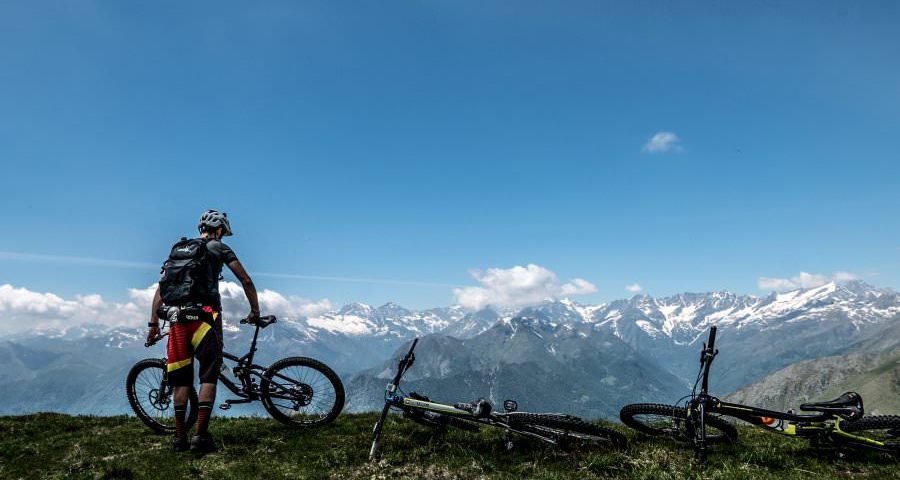 Ring tour from the Salvin hut.

Departure point: Chiaves
Difference in altitude: 850 meters effective
Type: asphalt 7.20 km (34%) – gravel 14.05 (66%)
Non-cycling: < 2.62 Km (12%)
Access: from Lanzo Torinese (easily reachable from Turin with the “direct” of the Lanzo Valleys) continue to Monastero and then to Chiaves, in whose square you park your car.

The itinerary has a substantial part on a non-cycling path that will certainly be little appreciated by those bikers who love only and exclusively cycling. In this case, just limit the excursion to the Refuge and return following the same road as the climb. In this way, despite a slight increase in length and height (22.84 km total – 860 meters total), the difficulty is definitely reduced (B.C.). From the square we proceed towards Monastero. After passing the hamlet of S. Giorgio, at a hairpin bend where there is the chapel of S. Grato (2.56 km), turn off following the signs for Mecca. After a straight stretch, you will face some hairpin bends. Near the fifth, when the road ends a little further on between the houses of the hamlet, turn onto a dirt road following the signs for the refuge (3.65). Many of the houses in Mecca and Barra below were set on fire by the Germans during the Second World War as they were considered the bases of the partisans. As it happened for the road of the lake of Monastero, also here have been asphalted, lately, numerous traits, fortunately in more contained way. The mantle, of the type “ecological”, turned out covered from a gravel that in descent it is able to reveal much insidious above all in case of brusque braking or in presence of rain. We then climb up the right side of the valley of the Rio Tesso hydrographic reaching a fountain and the junction to the nearby village Marsaglia (8.78). It is worth spending a few minutes to take a look at the Sanctuary dedicated to the Assumption of the Virgin Mary, built in Baroque style (perhaps by the hands of masters from Lugano) between 1771 and 1778 probably on a pre-existing chapel or votive pillar. Inside there are some interesting frescoes with episodes taken from the Gospels and a large collection of about four hundred ex-votos that illustrate the social changes and historical events of the last three centuries (particularly significant are those that represent war events between the First War of Independence and the Second World War). Once the place was the destination of pilgrims who, from the surrounding villages, came here to invoke the Madonna the beautiful or the bad weather. Today, the faithful meet on August 15 for a big party that includes, at the end of the religious services, the auction of the gifts brought by the defendants in order to raise funds for the preservation of the building and the classic picnic on the surrounding meadows with the distribution of polenta tanning. It is resumed with a short but steep ramp after which you ignore a cart road that leads from the left (9.08). Once you have reached the ridge with a lot of effort, you can reach the Salvin refuge (11.42) among the meadows. Upstream of the building, avoid the path marked “3R – Lake Monastero” and follow the cart track marked “3R Menulla – Rif. S. Giacomo”. The acronym stands for “3 Rifugi” and indicates a hiking route designed by the Lanzo section of the CAI that touches, in addition to the Salvin, the Baita S. Giacomo and the Peretti-Griva to Mount Angiolino. Leaving a less marked trace on the left (11.95), the path becomes a path (12.07), rather narrow, so much so that it often becomes difficult to proceed with the bike alongside (all lasts about fifty minutes). The signs (two red stripes on the sides and a yellow stripe in the middle with the initials) are numerous and avoid any doubt. With some ups and downs, you can ford numerous small streams. After passing two huts (13.83), the path joins a cart track where we climb back on the saddle (14.20), gaining the wide dirt road from Chiaves (14.66). With it we climb to the nearby Passo della Forchetta (15.00) where there is a monument dedicated to the memory of Michelangelo Peroglio and Mario Marino, respectively gold and bronze medals for military value: on April 28, 1944, their patrol was surprised by a raking of Nazi-fascists at the Roc del Gal. Injured, they sacrificed their lives to allow the retreat of their companions. The point, straddling the Val Grande and Tesso, is in a splendid panoramic position: at the bottom of the valley, we can see the town of Ceres with the evident railway viaduct; above this, on a rocky spur, the Sanctuary of Santa Cristina. From the pass, we take the path “3R S. Giacomo”. To avoid falls, it is advisable to be careful not to leave with your wheels from the same. After passing a repeater (15.14), you first touch an old mountain pasture and then the Santa Barbara pylon that precedes the building of the same name (15.84). Going down to the nearby Colle S. Giacomo we turn left (16.05). After a gate you are on the road coming from Chiaves (16,60). Go right for about fifty metres, then turn onto a cart track and soon meet path 3R indicated by a wooden sign with the words “Sistina” (16.69). There are about 500 meters of non-cycling trails that take less than 10 minutes. The alternative is to follow the abandoned road just before it is, however, all asphalted. Once you have reached a gravestone and an old pylon, the path bends to the left, reaches a meadow, descends towards a few boulders and then turns left again, returning to the woods. After a ford you will face a stretch with a very steep slope. When you reach a mountain hut (17.18), you come across a cart track that takes you to the Mecca pylon. From here, on the asphalt (19.19), we descend to the famous Sistine Fountain (19.86) and, leaving the detour to Cresto and the Passo della Croce (20.97), to the starting square (21.25). 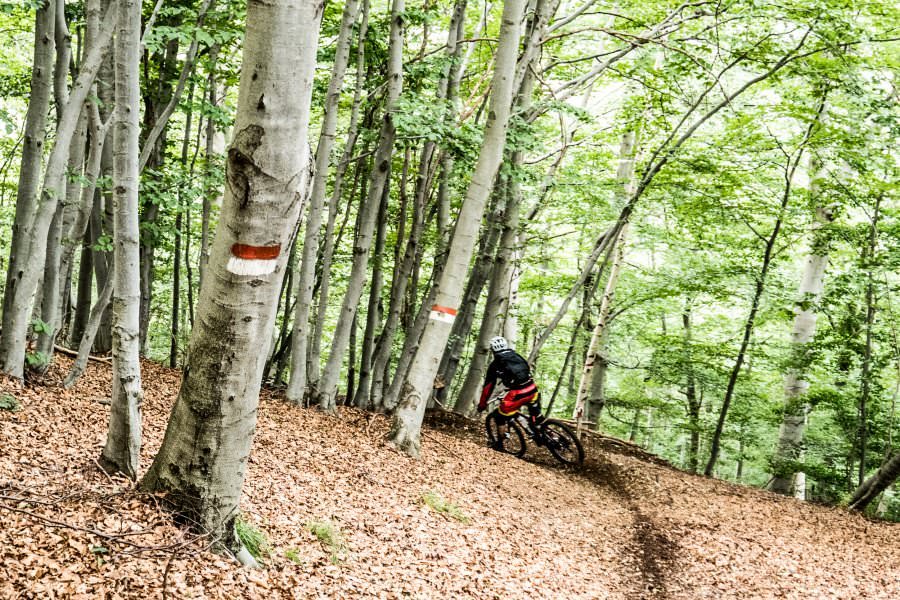 From Lanzo to Salvin 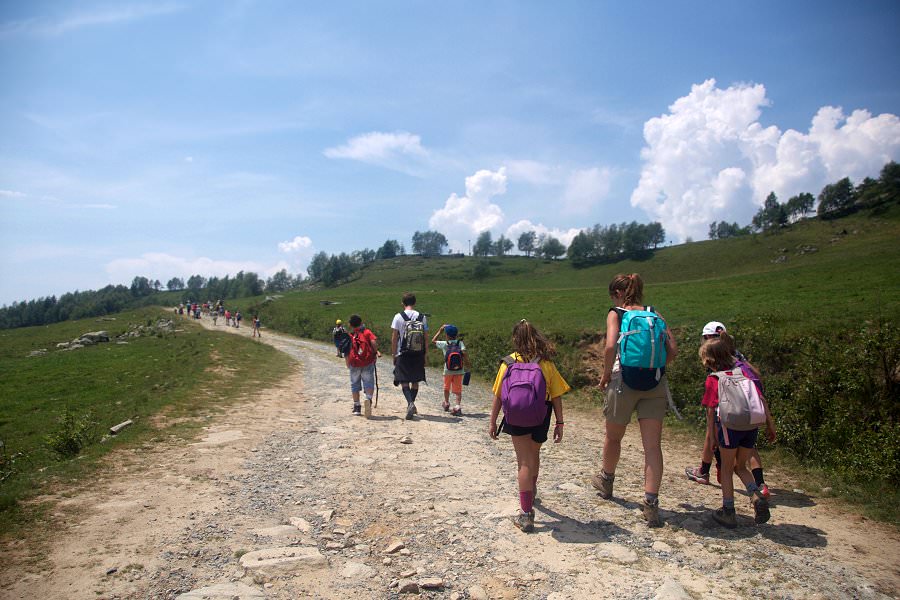 Go to the Salvin on foot 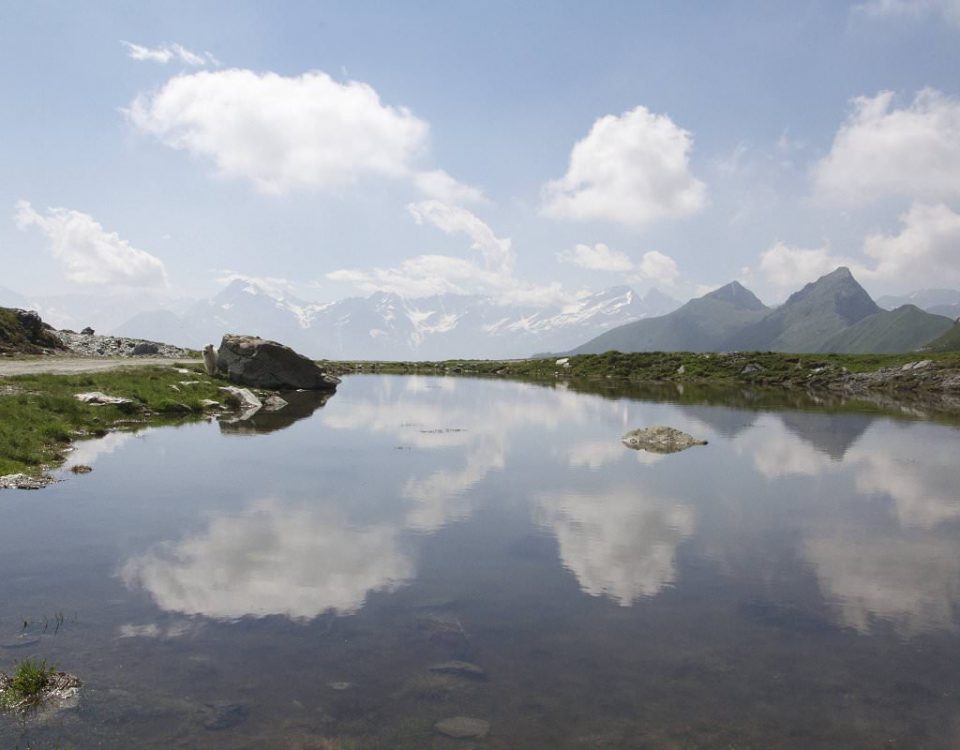